The people save the people

When government fails, you will always find support in the people around you.

Mutual aid and solidarity are nothing new- they have, and always will, exist in communities across the world both in times of calm and in times of crisis. While some are seeing opportunities to make money or spread falsehoods for their own gain, most working people are seeking out ways to help others. The amount of support that 0161 Community has been offered – in time, money, videos, resources, donations and more- is truly staggering. In this article, we’d like to explore how this amounts to more than simply charity.

For 0161 Community, it has meant, in material terms, the following:

These numbers are incredible and show the level of support 0161 Community has received from every single person who has engaged with us. However, this isn’t about what’s been bought, done or given out. It’s about more than that.

Initially it started with the banners: inspired by actions in Italy. In the late evening light, before the lockdown was implemented, and people were still walking to and from work, hundreds of meters of banners were hung. While unravelling and securing the banners, we heard shouts of encouragement and thanks; passers-by stopped to take pictures; and drivers hooted their support: the first sign of positivity, compassion and solidarity experienced.

Next day, those photos were posted in national news outlets to signify the support key workers have. The message was important- unpatronizing, inspiring and meaningful. These messages reached hundreds of thousands of people, and, we hope, inspired others to do the same. Banners were placed in Glasgow and in London; and have been rehung regularly across Manchester and Salford.

From there, 0161 Community reached out to ask for videos thanking key workers. This was in order to upload a live stream of positive comments and thanks for key workers and everyone who was doing their bit. True to form, the people rose and delivered. You can still see the livestream here. 0161 Community didn’t do this livestream, the people did- positively, compassionately and with purpose. People helping people is integral to how 0161 operates.

Organically, offers of cash donations started to come in and 0161 Community took the lead from those in the know. Taking suggestions from the key workers themselves, we offered what we could to the people they recommended.

A community nurse said that the call handlers were feeling like their work was being missed- we took them a parcel and hung up a banner outside their offices. Firefighters have been driving ambulances, but we were told that they felt like no-one knew. We delivered a package to a few stations and had a chat with them. Hospital workers told us they wanted to give the patients something to help entertain themselves- we delivered entertainment packages. There are too many examples to list here, but our gratitude goes especially to those workers who nominated other teams and groups for support- it meant that the donations were made in the most important areas. Thank you.

Someone suggested we speak to workers at a cold storage warehouse in Trafford Park, who had airline meals that were going unused. We got in touch and put together a plan. Again, offers of support came in. Again, the team smashed out the work- delivering 2,500 meals in less than an hour. Again, we saw more mutual aid across other incredible organisations- too many to mention. Bizarrely, while we were loading up, the warehouse staff offered us a pallet full of pizzas, about 250 they said. “We’re sick of them now. Been eating them for weeks.” In the end, they gave more than three times that amount.

The workers at the cold store didn’t need to offer us those pizzas. They just knew, innately, that it was the right thing to do- they knew they were part of a bigger community and understood that there are lots of people who needed the meals more than them. Those same workers were being made redundant- they didn’t know who and they didn’t know when-but lots of them and probably in the next week. Solidarity with them, and we hope they we can continue to support each other.

Workers across the board have been incredible resilient to everything that has happened. They put on their faces and they deal with the pressure. Underneath, as with us all, there is fear and uncertainty.

Examples of this come through in stories of 80% of bus drivers in a particular depot being furloughed, and other bus drivers being made to drive longer while buying their own PPE. Community centre volunteers fearing for the wellbeing of the people they support, and who support them. People being found in their houses with nothing in their cupboards, and no-one to turn to. We’ve heard it all.

Nowhere has this anxiety been more evident than in some of the reactions of people as they receive the donations. There was gratitude by the bucketful. There were smiles and thanks. There were tears. But there was also fear that their bosses would not let them accept donations; fear that they were unable to open their doors. Most poignantly, there were a couple of occasions where people truly didn’t think they deserved the donations.

One refuse worker refused to believe that he needed to be thanked or was an essential part of our community. He tried to deny us the chance to thank him and his fellow workers, claiming that it was just a job. No doubt, you see the value in refuse workers in every single day. They are the colleagues and allies of NHS workers- they play a key part in public health and should be valued as such. Of course, he was set straight, and we left him seeming a bit more positive and hopefully knowing that he, and his fellow workers, are immensely important to our lives. Thanks pal.

This isn’t about what has been done, bought or been given out- it’s about what we’ve shared in. A sense of empowerment and engagement in positive community mutual aid. A realisation of who and what is important in this world. A community where we work together for the greater good.

We didn’t grow, make, transport, store or offer to donate the meals or pizzas. We didn’t know where the Community Nurses had their offices and that they had had no messages of thanks. We didn’t invent an idea to hang banners outside hospitals. We didn’t record hundreds of videos to live stream to thank key workers. It was you and it was us that did all of these things.

This experience is ongoing, and part of something much bigger, not just filling in gaps where government has failed yet again. We will continue to work alongside all those who stand for community and concord.

Be proud of what you’ve given in these newly cliched “challenging times”. No matter how small a part of it you feel- each individual makes up a whole. You are valued. Do not forget. Together and united we are strong. 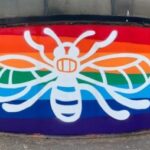 Next Story:
Support is more than money